Glen Cochrane wrote me the following when he sent his summary of chapters 8 till 10:

Summarizing McLuhan isn’t an easy thing to do. It’s like biking in the sand.

I couldn’t agree more! I have therefore decided to just use these chapters to frame two questions.

I volunteer as a guest speaker for the Dutch digital rights activists Bits of Freedom and speak often about privacy and the Internet (for example here. McLuhan had some interesting things to say about this topic:

The spoken word does not afford the extension and amplification of the visual power needed for habits of individualism and privacy.

He seems to say that it was the written word that afforded us privacy and gives an interesting example:

One native, the only literate member of his group, told of acting as reader for the others when they received letters. He said he felt impelled to put his fingers to his ears while reading aloud, so as not to violate the privacy of their letters. This is interesting testimony to the values of privacy fostered by the visual stress of phonetic writing. Such separation of the senses, and of the individual from the group can scarcely occur without the influence of phonetic writing.

In the electric age this is over because no form of secrecy is possible anymore. “At electric speed everything becomes X-ray”:

“Everybody has become porous”:

We know that the web has a radical set of affordances that make communication on it different from earlier communications. danah boyd writes about the networked publics that they have:

I would love to hear from the members of the reading group what their thoughts are about privacy in this current age (in the comments maybe?)! Was McLuhan right when he wrote:

It can be argued then, that the phonetic alphabet, alone, is the technology that has been the means of creating “civilized man” –the separate individuals equal before a written code of law. [..] Only the phonetic alphabet makes such a sharp division in experience, giving to its user an eye for an ear, and freeing him fom the tribal dance of resonating word magic and the web of kinship.

Are we losing our individualism nowadays? Becoming less repressed? Will the way we communicate change the fundamental fabric of our societies?

It is a persistent theme of this book that all technologies are extensions of our physical and nervous systems to increase power and speed.

It is quite predictable, [..], that any new means of moving information will alter any power structure whatever. [..] Speedup creates what some economists refer to as a center-margin structure.

The Internet can be seen as an incredible way to speedup and accelerate our own neural system. Traditionally the net is viewed as a decentralized thing with low (or no governance). John Perry Barlow’s Declaration of the Independence of Cyberspace is a great example of that. Factually we know that this is not true. See for example Tim Wu’s Who Controls the Internet or this visualization (source) which I certainly would not call decentralized: 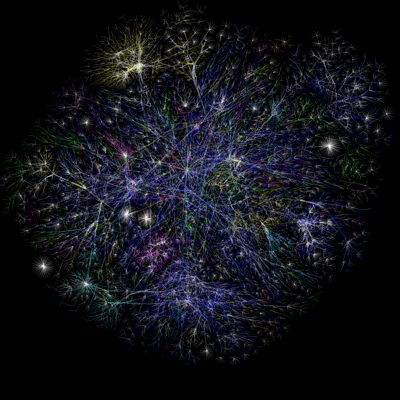 Paradoxically, the effect of the wheel and of paper in organizing new power structures was not to decentralize but to centralize. A speedup in communications always enables a central authority to extend its operations to more distant margins.

The question I’d like to ask my fellow readers is the following: are we mistaken when we think that the net will help democratize our society? Should we aim to slow down our interactions if we want to give people more say and agency?